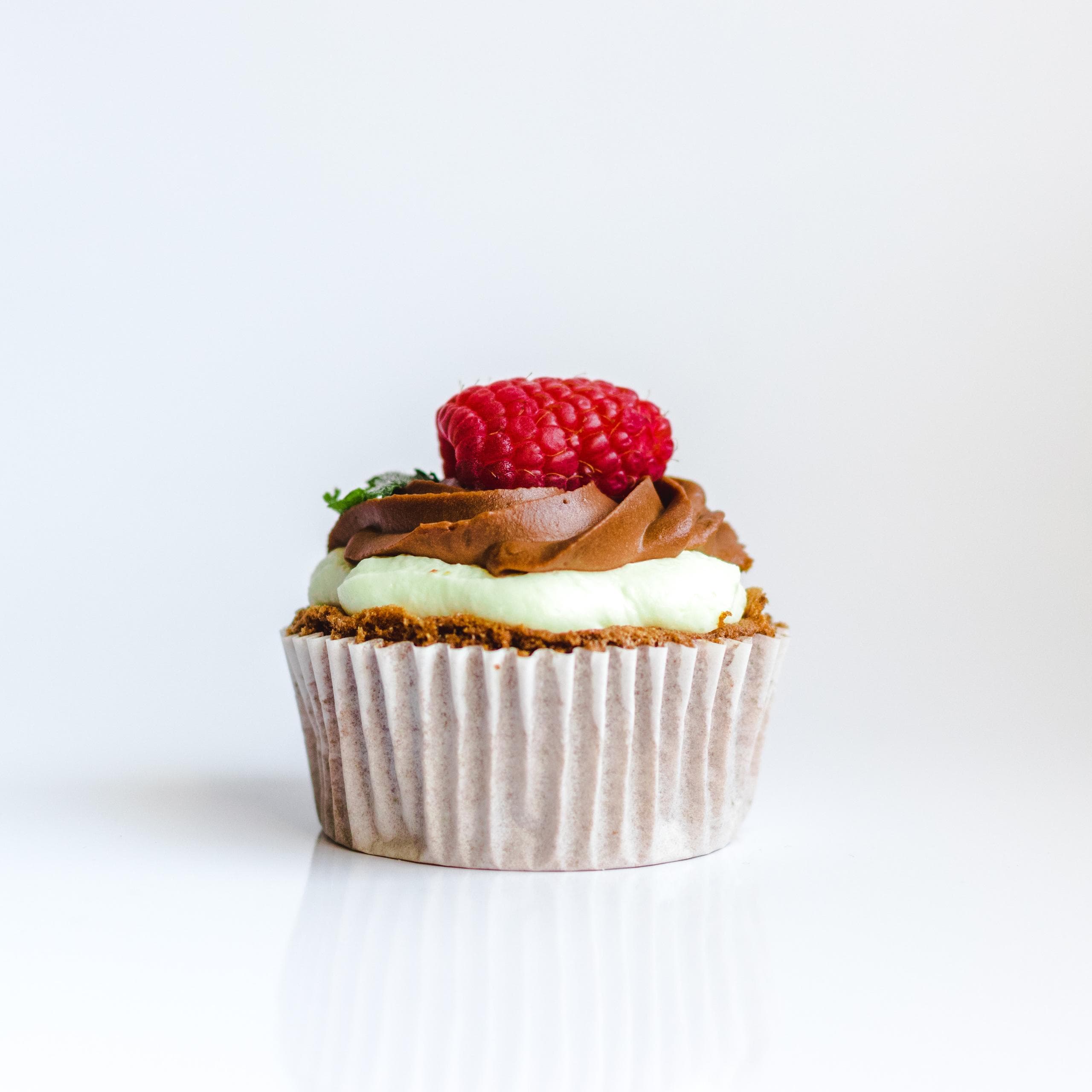 I reviewed CakeDefi and Defi-Chain in 2022 to answer the following questions: Is CakeDefi a scam? Is CakeDefi an easy entry into Crypto Staking? Who is the Team Behind CakeDefi? I also took a closer Look at the DeFi app and how much you could earn Staking Defi so let's dive into it.
Categories
Date
2022-02-23

CakeDefi is a Platform for Staking, Lending, and Liquidity mining their native Defi token. CakeDefi promises on their site: "Bake cash flow with crypto while you sleep." I told to myself: Getting Cashflow from Crypto? Sounds good. Sounds too good... Wait! Is it a scam?

CakeDeFi is no scam, but when Investing in it i recomend having an exit plan.

You can sign up for cakeDefi using this Link, I'll get a small commission.

As the name already suggests CakeDefi is a Decentralised Finance platform. Within CakeDeFi you can earn their native DFI token by Lending, Staking, and Liquidity mining. Within Staking they offer also a new Process called the Freezer. More on this in one of the next chapters. They got their own Native Token on their Platform called DFI. DFI is a Bitcoin Fork.

The coin has also proven stability even through the current Ukraine Crisis and the general Crypto crash this year. As shown in the chart from CoinMarketCap.

Interested, so let's dig a bit deeper into the CakeDefi features, the DFI chain, and the team behind CakeDefi and DFI chain.

The Freezer is a staking Pool where you could put your coins for a fixed amount of time. With a Minimum of days, up to 10 Years. (I would not suggest 10 Years). The Pro is that you will get higher interest rates for Staking. They offer details in a beautifully designed diagram. The Con is that you can not sell your coins at this time. DFI could fall to 0 and you can not do anything about it. That's why I would suggest choosing multiple shorter periods. 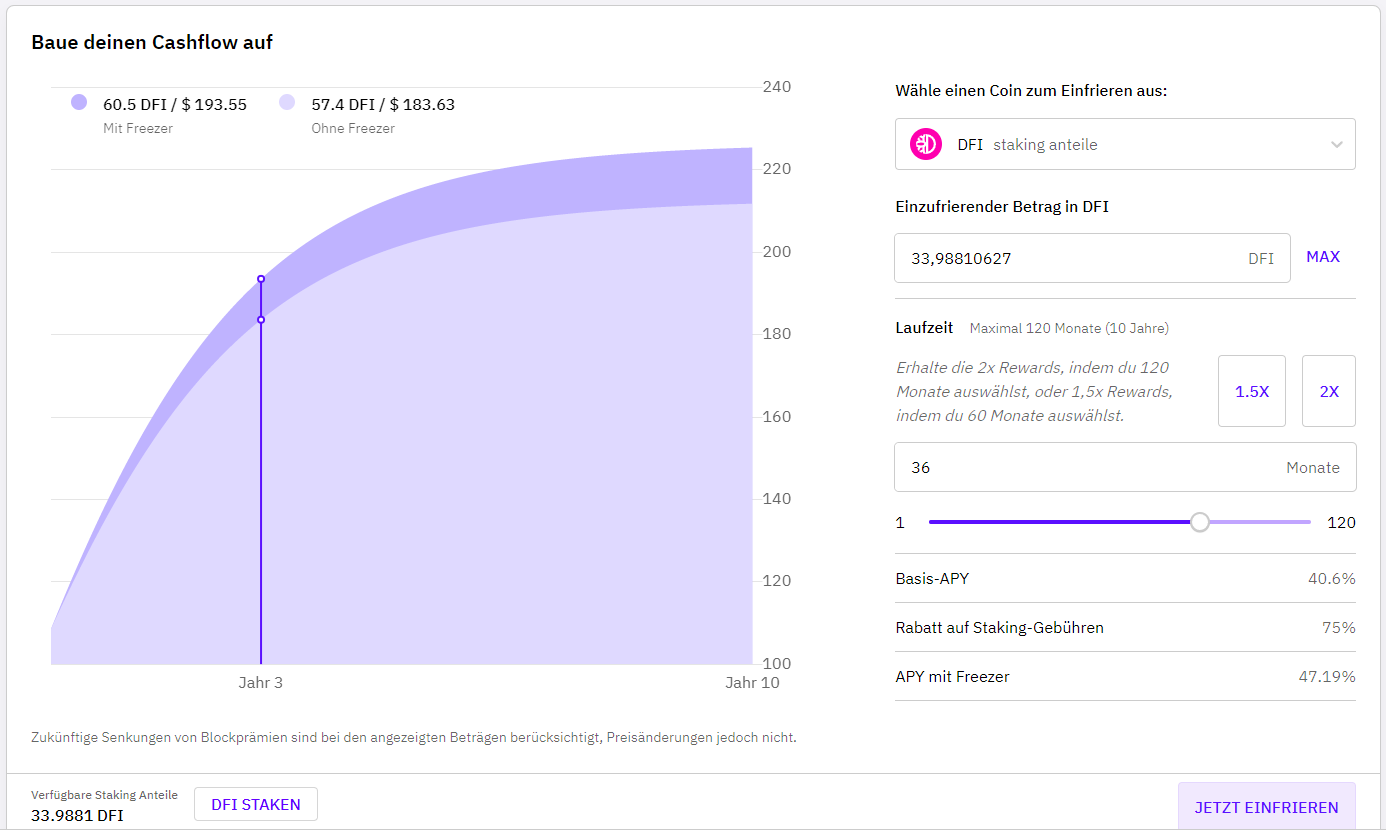 Another option to earn you're crypto-cash flow is with Liquidity Mining.

With Liquidity Mining you can get the Highest return rates, they promise over 50% APY for their Liquidity mining. You are earning these SWAP rates again in their native DFI token and put those rewards again into staking.

Liquidity mining could currently be performed with Bitcoin, ETH, USDT, LiteCoin, BTC Cash, and Doge with the lowest rates.

They also offer decentralized stocks. This is something I don`t like about CakeDefi. First of all, I want to own real shares of companies I invest in. Secondly, this also brings the attention from the SEC and the german Bafin against cakeDefi which could add a future risk.

You could lend BTC, ETH, USDT, USDC and get an Interest Rate of about 8% p.a.

According to CakeDefi lending is risk-free since they work with the institutional partners Sarrow and Signum Capital to cover the risks and provide their customers a risk-free way to make profits. The Interest rates are spilled up In the coin and DFI. By now (24.02.2022) it is 4% ETH and 4% DFI when lending. You can start lending within Batches, one of these as in the screenshot starting on March, 4. For me the rates are a bit too low, I would rather prefer a bit more risk and keep it in DFI Staking.

CakeDefi provides a well-designed app to access all its features. They really did a good job on UI/UX design I think. Even if the topic is complex they tried to briefly describe it into their app. As a critical person, I always do some extra research, but I always felt well informed.

They also provide you with Insights into your investment and Earnings. As you can see in the Anonymized screenshots below.

Dr. Julian Hosp is the CEO of CakeDefi. Julian is a well-known Austrian Stock and Crypto investor and Influencer who lives in Singapur. Where also CakeDefi is based. He has 83.4k followers on Twitter and 24k followers on LinkedIn.

He has written multiple Best selling Crypto Books, is an advisor for the EU Blockchain groups, and speaker of the Washington Speakers Bureau.

Before Founding Cake Defi he worked as a Medical Doctor in Innsbruck, Austria. Was Co-founder of TenX and worked as Blockchain Domain Expert and Book Author.

Even if he has fewer followers on Social Media, he is not less interesting.

According to his LinkedIn Bio, he started investing in Bitcoin in 2010. In 2011 he founded one of the first Crypto exchanges in Asia (Dgtmkt).

He Contributed to the Bitcoin, Ethereum, and Dash ecosystem and is a member of the Singapore Smart Nation a successful collective to Digitalize the Singapore Government.

U-Zyn Chua was also one of the first team members at TenX, where Julian Hosp is Co-founder.

CakeDefi is definitely not a scam. They got a good idea to bring the advantages of mining and Staking to people, who don't want to spend hours with wallets going into mining pools etc. With their services, they want to make the Crypto market accessible to people who are less into tech and go with the advantages beyond the early adopters.

The Team behind CakeDefi is really impressive and trustworthy. The CakeDefi founders Julian Hosp and U-Zyn Chua are respected Blockchain Domain experts.

I`m invested since November and even within the Crypto crash I was able to earn DFI through the crash and the course remained stable.Again, here the DFI price chart.

If you liked the article and want to support me, please use my Referral ID 975159 or use my referral link when signing up for CakeDefi. Right now when signing up and investing more than 50$, you will get a bonus of 30$ in DFI extra.

I hope you found this article helpful and I could provide you some insights into cakeDefi, stay tuned for an analysis of the DFI chain token.

If you have suggestions or want to learn more about cakeDefi you can contact me in the Say Hi Section.

The content provided in this blog is for informational purposes only.

This is no Investment Advice. I'm no financial advisor and I also have not considered your Personal situation. This is my own research, please do also your Own research before investing.